From Digital Square
Jump to navigation Jump to search

Digital Square aims to enable the global digital health community to move beyond the stasis caused by perpetual piloting of experimental projects, strengthen the existing ecosystem for digital health investments, and encourage new investments from traditional and nontraditional donors.

Pursuant to the above, Digital Square supports identifying and accelerating the use of global goods at the country level while supporting development of new technologies through the global goods investment process.

PATH is the prime recipient for the Digital Square grant. Therefore, Digital Square Investments in Global Goods is provided through subawards from PATH (e.g., subagreements or subcontracts for grant or contract funding, respectively, as appropriate per the solicitation type and scope of work). Due to the collaborative nature of engagement with subawardees, PATH frequently employs a cost-reimbursement (CR) payment mechanism in order to allow for more significant modification over the term of the subaward, if required. For more information, please review the Global Good Investment Process for implementers.

This page will introduce key elements of the grants and contracts described above.

An RFA will result in a grant to support programmatic objectives.

An RFP will result in contract to procure goods or services.

Each contracting vehicle may be implemented through a variety of legally binding documents once fully executed by designated signatories from each contracting entity.

It is helpful to use the terms "grant" and "contract" appropriately to avoid confusion. Although both terms indicate legality, grant implies a collaborative arrangement between parties to define the scope of work. While a contract indicates a scope of work prescribed by one party to be completed by another party. This simple distinction will communicate a significant difference to the audience about the expectations of the relationship between entities.

A grant is a type of legal instrument of financial assistance to carry out a public purpose.[1] A cooperative agreement is a type of grant agreement that often requires the funder's prior approval in specific areas that are determined and identified by the funder.[2]

The purpose of a grant is to transfer funds in order to support or carry out a public purpose. The relationship between entities is defined by collaboration to achieve programmatic objectives. This means that the recipient may have its performance measured against programmatic objectives; has responsibility for programmatic decision-making; and is responsible for adherence to funder requirements. The recipient's primary responsibility is to satisfy the direct beneficiaries.

A cost reimbursable (CR) grant provides payment based on actual costs. CR grants can be easily modified and allow for changes in scope, term, and budget. This payment type also lends itself well to multi-year grants for which quick start-up is needed, but the scope of work for later years is not fully defined. Reconciliation of costs via financial reporting also make it possible to issue advances (up to 20%) when needed and ensure recipients have adequate cash on hand to complete activities.

A fixed-amount grant provides the funder a specific level of support without regard to actual costs incurred by the recipient[3] for example, a grant based on milestone (i.e., payment is based on completion of an activity). Following funder review of a detailed budget to assess the validity of proposed expenses, prices are assigned to each milestone or deliverable by the parties. The assigned prices cannot change once confirmed in the fully executed grant.

This payment type is suitable for short-term projects with well-defined scopes. Accountability is primarily based on performance and results.

A contract is a legal instrument to acquire goods or services for the funder's direct benefit or use.

The purpose of a contract is the exchange of funds for good or services. The relationship between entities is defined by procurement, with the funder as a buyer and vendor as a seller; furthermore, it is directive and transactional. The contractor's primary responsibility is to satisfy the funder.

A cost reimbursable (CR) contract provides payment of allowable incurred costs to the extent (e.g., total cost or ceiling) prescribed in the contract.[4] This payment type also lends itself well to multi-year grants for which quick start-up is needed, but the scope of work for later years is not fully defined. Reconciliation of costs via financial reporting also make it possible to issue advances (up to 20%) when needed and ensure contractors have adequate cash on hand to complete activities.

A fixed firm price (FFP) contract provides payment that is not subject to any adjustment on the basis of the contractor's cost experience in performing the contract.[5] Accountability is primarily based on performance and results. Payment is based on funder acceptance of the designated outputs.

There are different levels of contracting, which are defined by how far an entity is from the original source of funding (i.e., a tier). After first, second or third tier, the term used to describe the entity within a tier will also indicate the contracting vehicle. The level of technical involvement and oversight by a pass-through entity will vary depending on the funding type. 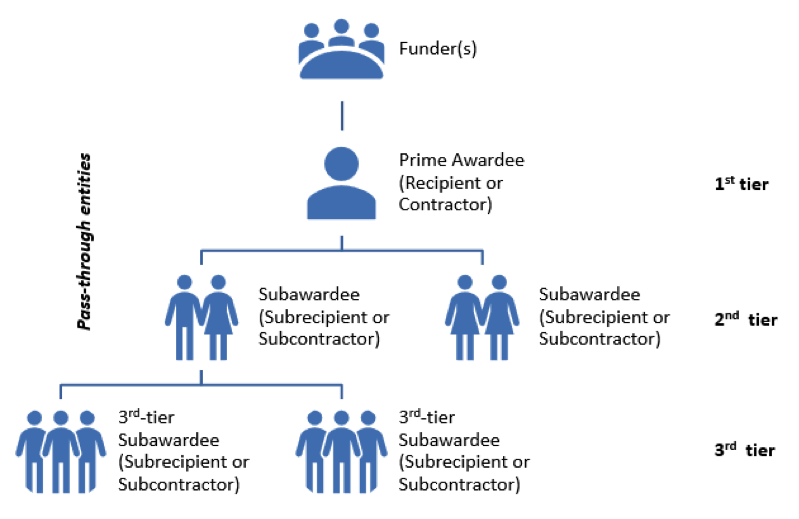 If the prime recipient or contractor requires external inputs to accomplish the work required by the funder, the prime may, if allowable per the terms of the grant (as a recipient) or the contract (as a contractor), engage another entity to perform the designated work. This makes the prime a pass-through entity, as funds are passing through it to another entity.

The second-tier entity that receives funding from the prime is referred to as a subawardee. The prime will determine the contracting vehicle (e.g., grant or contract) which in turn will indicate whether the subawardee is a subrecipient receiving a subagreement or subcontractor receiving a subcontract.

The subawardee's relationship to the original source of funding is one step removed hence, second tier. These entities do not have direct relationships with the funding entities. For example, funding provided by Digital Square through the Procurement Processes and Global Good Investment Process are to second-tier awardees or subawardees.

If a subawardee requires external inputs to accomplish the work required by the prime, the subawardee may, if allowable per the terms of the grant agreement (as a subrecipient) or contract (as a subcontractor), engage another entity to perform the work.

Please see below for a summary of terms introduced in the solicitation types, contracting vehicle and contracting tiers sections above.

The terms and conditions and subsequent donor rules and regulations in a grant agreement or contract will be determined by the funding entity and contracting tier. The governing document for project implementation will be the fully signed grant agreement or contract, which will detail these requirements. For example, see below for a summary of compliance requirements by funding type for the United States Agency for International Development (USAID), Bill & Melinda Gates Foundation (BMGF), and Deutsche Gesellschaft fÃ¼r Internationale Zusammenarbeit (GIZ), respectively.